Going global to get local

With my passion for social media, my love of networking, building web presence to enable businesses to do this too is very fulfilling. Most of my conversations begin with "what is Facebook?" or "What's the point of a blog?" or "Blog? Whats that then." So I begin to tell them about my journey of discovery in the world of Web 2.0 or more simply the interactive, community built web.

On Thursday March 20 I attended a networking event held by my local business community "Sneinton Business Forum" because during a conversation several weeks before with one of the organisers David Jones I was invited to give a 15 presentation about social media, Facebook and LinkedIn etc. and how I was using it to enhance my web presence and a web site I have created for a local group of Artists, "Sneinton Artists".  The usefulness for me is the integration of social media in to a website to create dynamic rich content at very little cost. The under lying question that always comes back at me is "How will it make me money?" I usually begin with ... it's primarily about adding value. To hold their attention I have had to give a lot of thought to how that translates in to cold hard cash.

The irony as I talked to these people, defending my patch, dawned on me. If it hadn't been for Facebook I wouldn't have been there at all! 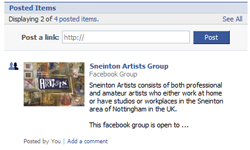 Back in Nov 2007 I created a Facebook group for the Sneinton Artists to promote their activities to people on Facebook. The idea was to build a following and attract people to our exhibitions. I posted the link to the group on several Sneinton groups already up and running including Sneinton Festival (47 members) Sneinton (168 memebrs) the main two I found. I found these and others with a Sneinton connection with the Facebook search. I had gone global to got local. From these posts and the events information posted on the facebook group itself Shona Munro direct messaged me and David Jones attended our Spring Showcase on Feb 24. It was at the exhibition that I discoved this forum of business people here in my very own community. It was their proactive attention and interest in Sneinton Artists and their curiosity in social media that made me want to engage with them. And so I came to present at the Forum.

Stage is set for a brave new world

Article from the Nottingham Evening Post - Monday 17 March - and its all about me!

While some computer experts talk in techno-babble, Caron-Jane Lyon knows how to explain things simply. She has combined her life  in the theatre with new IT skills to help boost the arts online. After a degree in theatre design and technology, Caron, 35, started work as a stage manager, where she sourced props for productions. She regularly found herself using computer techniques like Photoshop for paper-based props.

Whenever money's needed on stage, for example, you need to design notes that look realistic but couldn't get you into trouble if an audience member picked one up and tried to spend it."I loved the creativity and ingenuity in this part of the job, but the further up the ladder you go in most industries, the bulk of your work ends up being admin." Having moved around the country as a freelancer, Caron was about to accept a role with the Royal Shakespeare Company - that would entail more travelling - when she decided to put down roots.

Caron's partner was based in Nottingham, so she moved to the city and started temping. Working for Boots, Caron realised she had unsung talents. "I had this wealth of IT knowledge that I didn't know I had. I arrived as an admin temp and within a week I realised my photoshop skills were pretty good, and I thought, 'Maybe I'm on to something here'," she said.

Caron took a course in web design in Newark and it set her thinking about how she could help people in her former profession. "In the theatre you often have no contact with IT, some clients I deal with don't even have e-mail addresses. It's 'IT shy' people in the arts that need IT direction and I realised I could offer that."

PCM Creative has existed in name since 1995, but with help from Nottinghamshire Business Venture, Caron launched the firm as a full-time concern last October. She embarked on the New Entrepreneur Scholarship (NES) with NBV. The NES programme was set up to support successful and sustainable businesses.

Based at her home in Sneinton, Caron creates online presences for organisations - in the form of websites, Facebook groups, blogs, MySpace pages and YouTube clips - helping them use social networking tools to find new customers.

Liz Yeatman, NES project manager for NBV said: "Caron is making a fantastic success of her business. The NES programme enables people like Caron to acquire the skills they need to start a business venture."

Living wage in the West End?

How can anyone live and support themselves on £381 a week before tax and NI in London?
Equity are campaigning hard and negotiating harder for Actors and Stage Managers through out the West End who are engaged on Equity contracts. Exclusive news reported in The Stage is the beginning of a public media awareness of wages for theatre workers in the UK. Did you know they were paid so little? This is if they are on a union negotiated contract at all. So many theatre workers because of the working hours or just low rates of pay are working for less than minimum wage.


Exclusive: West End performers are willing to take industrial action if London theatre managers do not agree to a 44% minimum wage hike being demanded by Equity.

The trade union is currently pushing for the existing basic pay rate for actors working in the West End to increase from £381 per week to £550. A new second minimum wage of £650 is also being sought for performers who are required to work on Sundays. To read the full article click here