This post was originally posted in the forum at the new Social Media Mafia social network created by Don, Chris Hambly a huge influencer of mine. I have learnt a great deal from Chris and his approach to social media. An educational technologist his academic analysis of attitudes and behaviours to social media development is inspirational. I'd like to extend my forum question to you, my blog reader. I also have some invitations to the Social Media Mafia network. If you would like to join let me know. 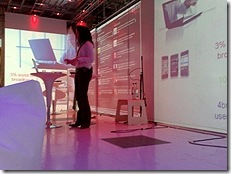 I often tweet at events on behalf of the event taking place. The event or project will have established a Twitter account and built up a following separate from the host companies twitter identity. @pilot_theatre with the @shifthappens event account for example. Using Twitter as a back channel during the lead up and on the day delegates are invited to tweet to their hearts content. Some events have tweetdeck streaming by on the screen at the main stage. With a hash tag running, pooling together the twitter buzz is a satisfying and compelling viewing. With twitter novices the tag often is a repeat of the twitter account. For example @getambition's series of roadshows thoughout the UK began with a hash tag #getam  selected for being identifiable with the project and easy to remember plus consideration for efficient use of those precious140 characters but before the conclusion of the first event our #getam tag had been unanimously superceded by #getambition. It proved to be a chatty back channel with delegates discovering fellow tweeters in the room and delegates from previous events returning to chip in with questions they hadn't asked at their regional roadshow. The extended networks of the Amb:IT:ion team @billt, @documentally, @hannahrudman, @beyongolia, @pcmcreative, @manthorp were also key and gave us the delights of @bubblino (http://www.qik.com/video/1523629) a great example of the generosity of the Twitter community.

In all, getting the opportunity to tweet repeated format events gave me great experience of how to balance conversation across twitter.

I'd like to hear about your experiences as custodian tweeter or as a delegate at an event encouraging tweeting and your experience as a remote follower.

Equity@Edinburgh 2009: Your voice, Your chance

Equity is in Edinburgh from Aug 24 - 29...The Facebook group

The most important session for practitioners to influence their sector is on 27/08/09 Working in Independent Theatre – the Essentials - 1400-1600 Free (ticketed) at Festival Theatre, 13-19 Nicholson Street (venue 244).

Sadly it will be the least well attended. Social Media has no visibility in the ITC (Independent Theatre Council) contract or the Fringe contract at present I would like to see that change.

Please find time to fit this one in your diary. You do not have to be an equity member or working or ever worked on an ITC contract. Come and share your concerns, experiences and needs for a theatre contract for digital age.

I will be there.
Caron