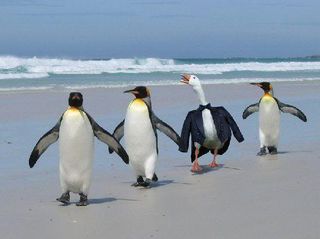 Online this is a question of no considered consequence and an arena for contrasting hysteria.

Signing up to a new network, registering on a site or subscribing to a service we freely give away our email address. It's a currency of sorts and we often don't see it in that way. The most common example is parting with your email address to download a white paper or access a PDF promising knowledge and insight. This transaction is an arrangement where you have given permission to receive updates from the producer of the knowledge or insight. Newsletter rules and regulations exist to prevent exploitation of email address connection.

An email address do not identify you. A street address does not define you. It locates you. Other forms of ID often accepted include utility bills. These do not define you they assert your commitment to make and maintain a payment schedule. What constitutes provable qualified identity?

Avatar is a word that have emerged with the digital age a symbol, image, picture or photo representing you in an online space. Is this also true of the offline world too? In the UK the major accepted forms of ID are a passport and a drivers license. But what if you have never traveled or learnt to drive a car? With a drivers license the introduction of the photo license is relatively new. "Until July 1998 driving licenses outside Northern Ireland did not have photographs. Anyone who holds a license issued before this date may retain their photo-less license until expiry (normally one's seventieth birthday) or until they change address, whichever comes sooner." wikipedia What about the 'old' birth certificate? No photo, no validity?

It's only when your life journey is halted because your face doesn't appear on apiece of plastic that you realise just how limited proving offline identity is. Sadly it ends a dream. In a few weeks my partner (a traditional media and oil painter) and I are due to make a pilgrimage to his childhood summer holiday retreat. For years he has wanted to take this holiday but the cottage is very popular. Its going to be this year and recently the announcement of iPhone 4's HD video, improved camera and combined connectivity... the all in one media capture and productivity devise for a artist to create media with out a pack full of kit.

Is there a solution or is identity in the commercial world destined to dissolve. Captured reflection the only real you?

The Ying of Dans Iphone Wang from Philip Campbell on Vimeo.

It should have been the beginnings of a beautiful collaborative adventure.