Food Crime... the musical to #StopFoodCrime

That is producer, not maker. Whats the difference? In this blog I hope I can explain.

Firstly, what is a producer anyway? This definition illustrates my point

"Producers play an integral role in the television, film and video industries. A producer will oversee each project from conception to completion and may also be involved in the marketing and distribution processes. Producers work closely with the directors and other production staff on a shoot...the producer deals with all the practical and political aspects of keeping a project running smoothly, so that the director and the rest of the team can concentrate on the creative aspects."

Now, a producer in these terms is a scoped role far more extensive than I delivered to The New Optimists but the sentiment of how I approached the commission are reflected in the tasks producers carry out. To me a social media person is integral, sees a project through from concept to completion, may be involved with marketing and works closely with the direct and production staff. As a social media person the reputation and portrayal of the project online and understanding the multitude of social media accounts distributing context appropriately while nurturing an audience is an important part of what I do. Pre - Performance - and Post. Legacy is is important to me too.

Being new to the organisation my first task was to understand who they "The New Optimists" were, what resources thay had for me to work with and what their overriding expectation of social media output was going to be.

The expectations were to

As producer I was able to step back from the creation of the social media out of necessity, with the budget little time was available for editing or considered composition. For example, I requested company members write a short blog post each. I took the text, accented the posts with a photo before publishing the posts on the The Optimists website.

With a limited budget the effective use of folksomony is extremely valuable. Hashtags are folksonomic. User defined terms to provide quick access or knowledge retrieval.

My second task was to make it all happen with as little impact on the creative production process as possible. I want to iterate that this role was not about marketing or advertising, it was about defining an audience and a legacy. What happens next to this project is unknown to me but my objective was to deliver a collection of media to act as a beacon online for what ever comes next... at a guess the further work of raising a general awareness about Food Crime and the work that is on going to protect the integrity of out food supply, globally.

Wow, big stuff when you see it in writing like that.

So... understanding. For every project or client I build a digital scrapbook. This is a page hosted on my PCM website where feeds and content embed widgets can be collected.

The is The New Optimists Scrapbook Page.

Its a mish-mash, not particularly elegant but serves a purpose, to pull all the available media relating to the project together.

Now the project is over this is it's PCM legacy. 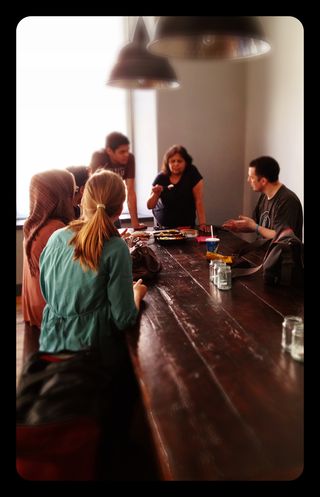 The discovery of The Lace House was delightful. The potential for casual co-working is tangible. The light is wonderful, the seating chic and comfortable, the hospitality warm and engaging, the space absolutely perfect for PCM style events. I like the place! Sach the owner is treading a path of sustanable realistic development mirroring the FibreCamp ethos of sharing and word of mouth to get thier 'show on the road'

This months Notttuesday is being hosted by The Lace House a new cocktail bar specialising in Rums and is super close to PCM HQ at Lace Market House.

As ever Nick Barker has lined up a speaker to provide perspective on our technology driven businesses and insight to those interested in tech in general.

This month is Ian Fletcher Chief Technology Officer of Workflow and Playout. He was formerly CTO at OmniBus Systems and is responsible for the development of the iTX automated playout system used in many TV production houses around the world. The hefty co working table (shown above) lends it self to group dining too. Bhooka, 'Hyper Local' gourmet curry, lunch time delivery service have offered to deliver later in the day especially for us. There are 12 places at the table, would you like to eat before the main event? Cost: £3 a head << use this link to reserve a place. Food will arrive at 5.45.

More info about The Lace House...
The venue is new, the website is not live yet... FaceBook is though

Whether you want to join us for food or to attend as usuall for drinks and a good speaker, this venue will I hope, delight you too. Our usual venue has an in-house event preventing us from hosting there this time. I hope you will find your way to The Lace House. See you Tuesday! 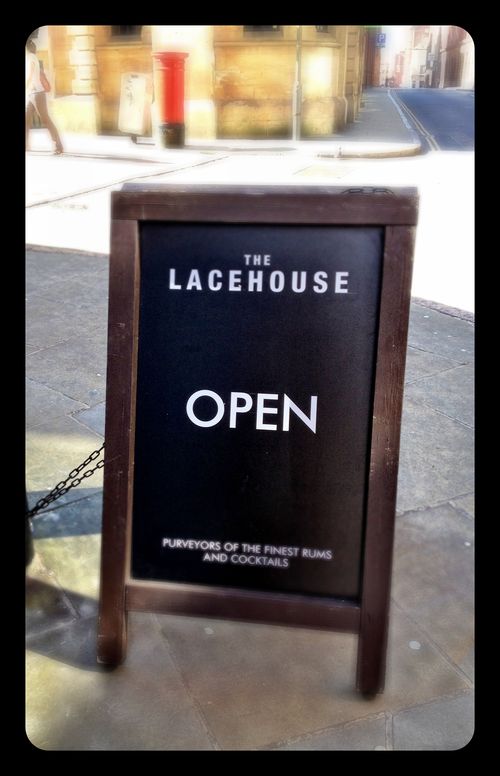