Hello. I'm just looking to connect with people involved with TED, having set up TEDxRushcliffesalon in Nottingham. Best wishes, Amy

Amy has been running a TED discussion group in Gamston, Nottingham for the past 3 years. Those taking part recently discussed making it a Nottingham-wide group and the possibility of putting on a TEDx event in the future.

TEDx events in Nottingham is something I’d like to continue.

Tonight was the first digital TEDxRushcliffesalon of the year. Two TED talks had been proposed and links sent a few weeks ago. The 1 hr zoom tonight was then a conversation informed by the talks. 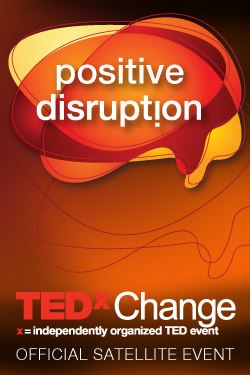 Positive Disruption
Change is talked about alot in organisations. It is positive force. It fills some with fear and others with exhileration.

TEDxChange 2013 will take place on Wednesday, April 3, 2013 starting at 9:00am PDT in Seattle, Washington (5pm UK time after the clocks have gone back on Easter Sunday). Themed Positive Disruption, TEDxChange 2013 speakers will challenge preconceived ideas, spark discussion, engage leaders and shed light on new perspectives. TED.com will provide a free live stream of TEDxChange and it is this that forms the central content of TEDxLaceMarketChange.

After the success of TEDxLaceMarket in Nov 2012 the team were keen to host another TEDx event. A full scale event owuld have been costly and time consuming so we opted to utilise the facilities we have to had at no extra cost. I wonder if we will be the smallest official TEDx event to date.

Cellar54 and PCM projects (TEDxLaceMarketChange partners) are based in Nottingham's LaceMarket. With in LaceMarket House we have high speed internet which we have taken a little for granted as recent local news is reporting an initiative to bring faster broadband to the area. At Cellar54 as an HD web.tv studio we could not have developed the business had we not had reliable fast internet. If face it's why we moved there in 2011. We are using the Board Room which comfortably seats 10. With Me (PCM projects), Phil (Cellar54) and our key speaker Marsha Smith (Secret Kitchen Cafe & TEDxLaceMarket top speaker as voted by the audience) we have 7 seats for a physical audience.

A bit more about TEDxChange.

The venue: LaceMarketHouse's Board Room has been used to bring livestreamed events to a local audience namely from Amb:IT:ion Scotland and we will be using the installed ethernet connected smart board and projector with wifi connectivity for the audience.

Disruption is usually unwelcome. It represents conflict, chaos, and potential danger. We discourage disruptive behavior in our homes and our societies, often favoring passivity and compliance.

But disruption can be a positive – sometimes vital – catalyst for change. It can challenge old assumptions, ignite conversations, activate authorities and expose new possibilities. Disruption can shed a unique light on difficult issues, giving a fresh urgency and perspective to the challenges of our global community.

To solve the most intractable challenges in health and development, we need positive disruption. It is the path to true progress.

Melinda Gates: Host
Melinda Gates is co-chair of the Bill & Melinda Gates Foundation. Along with Bill Gates, she shapes and approves the foundation’s strategies, reviews results, and sets the overall direction of the organization. Melinda will host TEDxChange from the Gates Foundation campus in Seattle, Washington.

Cathleen Kaveny: Religion, tradition, and modernity
Cathleen Kaveny is an American legal scholar and theologian. She is a John P. Murphy Foundation Professor of Law and Theology at Notre Dame Law School, and is currently a visiting professor at Princeton University.

Roger Thurow: Shifts in agriculture
Roger Thurow joined the Chicago Council in January 2010 after three decades at the Wall Street Journal. For 20 years, he was a foreign correspondent based in Europe and Africa.

We will show a trailer from the feature film Revolutionary Optimists, about how children are saving lives in the slums of Calcutta. We will then invite Salim and Sikha, two of the children featured prominently in the film, to join onstage for Q&A.

TEDxChange is the live stream offering. Mean while accompanying the livestream at TEDxLaceMarketChange we are hearing progress reports from 2 previous TEDx speakers Phil Campbell from TEDxNottingham's Local Hero's event and Marsha Smith from TEDxLaceMarket's Family & Community event. We will record 2 podcasts up dating the local TEDx audience on how TEDx events progressed thier initiatives and thier take on Positive Disruption.

Join is from 5pm at Lace Market House. To confirm a seat please us the ATTEND button on the TEDxLaceMarketChange event webpage.